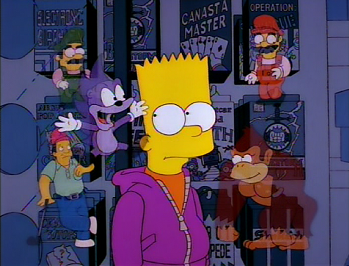 The character must make an important decision. Partially transparent heads of several characters appear around them and give them advice. Sometimes the advice is a repeat of the things these characters said earlier in the episode. This is most common in animated works, where it is easiest to portray such an event.

A more mundane and easy to show variant is to have the character very clearly remember their advice.

Compare Good Angel, Bad Angel, Hearing Voices, Helpful Hallucination, What Would X Do? Not to be confused with videogames' Exposition Fairy.