Film / Man of the Year 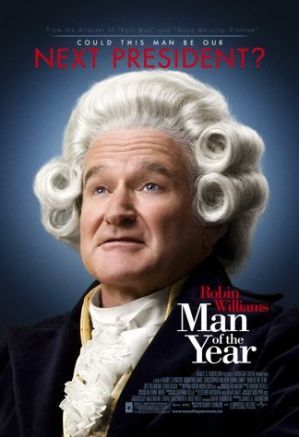 The Election is just the beginning...
A 2006 comedy/drama starring Robin Williams, Christopher Walken, Lewis Black and Laura Linney and written and directed by Barry Levinson.
Advertisement:

Tom Dobbs is the host of a successful political talk show. Always happy to take shots at that system he sees as broken, he has no shortage of material with the presidential election coming up. Then during his warm up act one day, an audience member suggests he should run for president. He laughs it off at first, but after a huge wave of support, he does put his name on the ballot, of course expecting not to win. The shocker? He does. Trouble is he owes his victory to a computer glitch in voting system marketed by Delacroy, a private company with a rising stock price. To protect their fortune, Delacroy executives want to keep the glitch a secret, but one programmer, Eleanor Green, wants Dobbs to know the truth. Can she get to him?