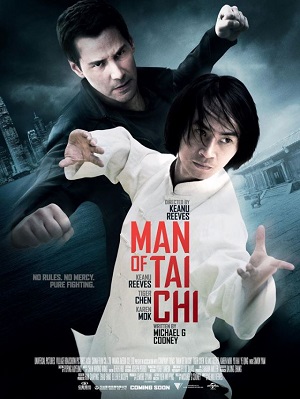 FINISH HIM!!!
You owe me a life.
Advertisement:

Man of Tai Chi is a 2013 Martial Arts Movie notable for being the feature directorial debut of Keanu Reeves.

Stuntman Tiger Chen stars as a Chinese delivery boy and student of Tai Chi who enters into an underground fighting tournament against his master's orders in order to win the money necessary to keep the temple where he trains afloat. The criminal mastermind behind the tournament, Donaka Mark (Reeves), is impressed by Tiger's fighting abilities, and pushes him to fight more and more, to the point where Tiger begins to risk losing his soul to violence. In the meantime, Detective Sun Jing Shi of the Hong Kong police investigates Donaka Mark, over the objections of her superiors, ultimately trying to recruit Tiger into her efforts to bring Donaka down.

The film received mostly positive reviews, praising Reeves' direction and the fight scenes choreographed by Yuen Woo-Ping. Both Tiger Chen and Yuen Woo Ping had previously worked with Reeves on The Matrix.

Not to be confused with Tai Chi Master or Tai Chi Zero.