Film / Man on the Moon 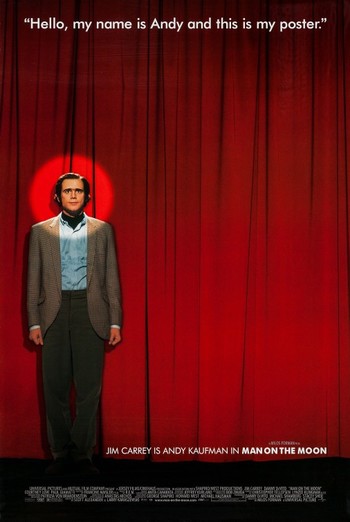 "Andy, did ya hear about this one?
Tell me, are you locked in the punch?"
Advertisement:

Man on the Moon is a 1999 postmodernist Biopic of Andy Kaufman, directed by Miloš Forman, written by Scott Alexander and Larry Karaszewski, and Titled After the Song by R.E.M., who also provided the score and a new song for the movie: "The Great Beyond".note The film's soundtrack album, released a month before the movie, is generally regarded as a part of the band's catalog despite featuring a variety of other artists. The film is the third and final installment of Alexander and Karaszewksi's "anti-great man" trilogy, following Ed Wood and The People vs. Larry Flynt, the latter of which was also directed by Forman.

The bulk of the film chronicles Andy's rise to stardom via the comedy club circuit and Taxi in The '70s, and the fall he suffers in The '80s as his eccentric acts become harder for those who care about him — much less audiences — to understand, much less embrace. Acknowledging its use of Artistic License upfront, the film features many people who knew and worked with Kaufman both before the camera and/or behind the scenes, but it pivots upon Jim Carrey's performance as Andy and his many alter-egos.

In 2017, the documentary Jim & Andy: The Great Beyond was released on Netflix. Confirming long-standing claims about the movie's production, it showcases behind-the-scenes footage of Carrey staying in character(s) all through the production of this film — even to the point of getting into a real scrap with Jerry Lawler.

Not to be confused with the film The Man in the Moon. If you're looking for the similarly-named trope in which the moon is depicted as having a face, look here.

"Hello, my name is Andy and these are my tropes."