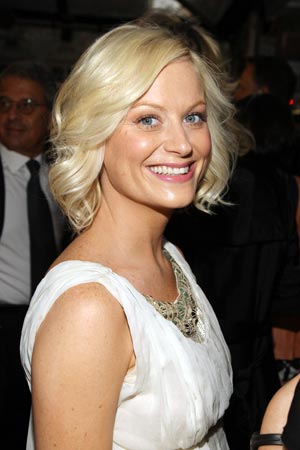 Amy Meredith Poehler (born September 16, 1971 in Newton, Massachusetts) is an American actor and comedian. She is best known for being a former cast member on Saturday Night Live (including being co-anchor of its Weekend Update segment) and for producing, frequently directing, and starring as go-getter never-give-up government worker Leslie Knope on Parks and Recreation. Like many of her fellow comedians, she was trained by the famed Second City improv troupe.

Poehler co-founded the Upright Citizens Brigade, an improv group that went on to have their own open theaters and training centers on both coasts, as well as a sketch series on Comedy Central. She also co-starred in the 2008 film Baby Mama with her former Weekend Update co-anchor Tina Fey. She is also executive producing Welcome to Sweden, a sitcom that is created by and stars Greg Poehler, her brother. She makes occasional guest appearances playing a deranged version of herself, although in the show's universe she's not related to her brother's character.

On SNL, her most notable recurring characters were Kaitlin (a hyperactive kid who pesters her step-father Rick [played by Horatio Sanz]), Nettie Bo Dance (wife of Percy Bo Dance [Darrell Hammond] from Appalachian Emergency Room), Sally Needler (one half of The Couple Who Should Be Divorced [her husband, Dan, was played by Seth Meyers]), Amber (a one-legged hypoglycemic with a flatulence problem), and Deidre Nicks (one of the hosts of The Cougar Den, a talk show about older women who date younger men). Poehler's most popular celebrity impressions include Hillary Clinton, Avril Lavigne, Dakota Fanning, Nancy Grace, Sharon Stone, Michael Jackson, Madonna, and Rosie Perez. She also famously performed on the show's 34th season while visibly pregnant with her first child, not taking off until she actually went into labor during that week's show.

Poehler has helped to co-create two animated series, The Mighty B! for Nickelodeon, and Duncanville for Fox Entertainment, and has voiced the main leads of both shows.

Poehler was married to Will Arnett, but they went through a divorce in 2012. They have two sons. She's also an outspoken feminist who co-founded the website Smart Girls at the Party (now Amy Poehler's Smart Girls

), dedicated to young women who are "changing the world by being themselves".