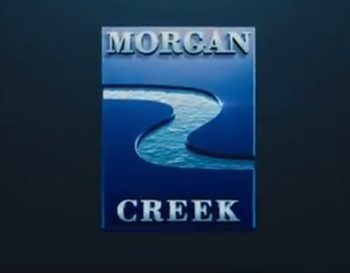 Morgan Creek Entertainment Group (or simply Morgan Creek) is a production company founded in 1987 by former auto import mogul James G. Robinson and producer Joe Roth. (The name comes from The Miracle of Morgan's Creek suggesting Joe Roth is a big Preston Sturges fannote He co-founded the Disney-based Caravan Pictures, whose name and logo are each a Shout-Out to Sullivan's Travels) Best known for Robin Hood: Prince of Thieves, the Young Guns films and the Ace Ventura movies but also responsible for a string of critical and commercial bombs, with some of them affected by Executive Meddling on Robinson's behalf. They went through different distributors for the output including 20th Century Fox (1988-1990) note except for Renegades and Coup De Ville, which went through Universal and Major League, which went through Paramount, Warner Bros. (1991-2005) Note  They also distributed the Direct to Video Ace Ventura Jr. Pet Detective years later, and Universal (2005-11).

Films produced by Morgan Creek include: