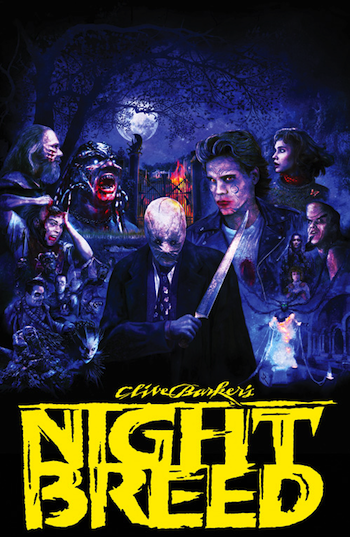 Boone: Then it's true.
Peloquin: Everything is true. God's an astronaut. Oz is over the rainbow, and Midian is where the monsters live.
Advertisement:

A 1990 fantasy-horror film directed by Clive Barker, who adapted his own novel Cabal.

A masked Serial Killer is stalking the families of the city, killing them brutally, and Aaron Boone (Craig Sheffer) has been having nightmares where he sees the crimes through his eyes. In his nightmarish dreams he also sees the strange, underground city of Midian and its monstrous inhabitants, feeling a strange pull towards it. The nightmares are so bad that he had been seeing Doctor Philip Decker (David Cronenberg), who is worried he's getting worse. After Dr. Decker's "lithium" nearly gets him run over by a truck, he meets Narcisse (Hugh Ross), a touched man who babbles about Midian, and claims to know where it is. Deciding to take the chance, Boone heads there and promptly gets killed for being suspected of being the serial killer.

Then he leaves the morgue.

With a music score by Danny Elfman that's very reminiscent of Batman (1989), Nightbreed is a gorgeous, disgusting movie with a captivating mythical mood. The titular Nightbreed aren't quite monsters, and the humans aren't exactly saints either.

The film production saw quite a bit of Executive Meddling from its distributor 20th Century Fox, most prominently resulting in a Focus Group Ending, which deviated quite a bit from the original novel's ending. Clive Barker was vocally unhappy about the studio interference, and for years afterwards, he longed for the recovery of the reels so the film might be re-edited. Russell Cherrington, a film scholar at the University of Derby, was eventually able to get his hands on a couple of different workprint cuts of the film through various sources, recompiling them in 2012 into a 159-minute cut (as opposed to the studio approved version's 102 minutes) that was much closer to Clive Barker's original vision, called The Cabal Cut.

The release of the The Cabal Cut generated much renewed interest in the film, leading Shout! Factory to obtain the license to the film in 2013. Shout! Factory was eventually able to recover the original film reels, allowing Clive Barker himself to put together a official Director's Cut version (clocking in at 122 minutes), which was released in 2014.