Film / The Night Before 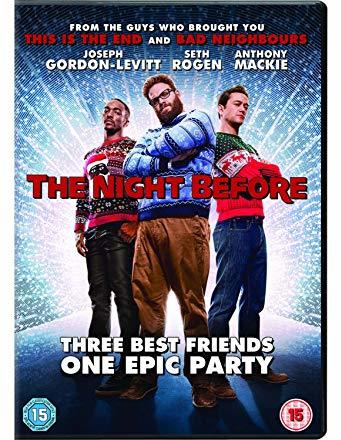 The Night Before is a 2015 Christmas comedy film starring Joseph Gordon-Levitt, Seth Rogen and Anthony Mackie.

After Ethan Miller (Gordon-Levitt)'s parents died on Christmas Eve, his two best friends, Isaac (Rogen) and Chris (Mackie), decide to cheer him up by having a night on the town, full of drinking, drugs and partying. That night ends up becoming a Christmas tradition for them. However, 14 years later, Isaac is now married and about to be a father and Chris is a famous football player, leaving Ethan to watch his friends move on without him. As a result, all three decide to celebrate one last Christmas together, and with Ethan scoring some tickets to a private and extravagant Christmas party, it will be an eventful one.

Not to be confused with the 1988 teen comedy of the same name starring Keanu Reeves.