Film / Don't Turn the Other Cheek! 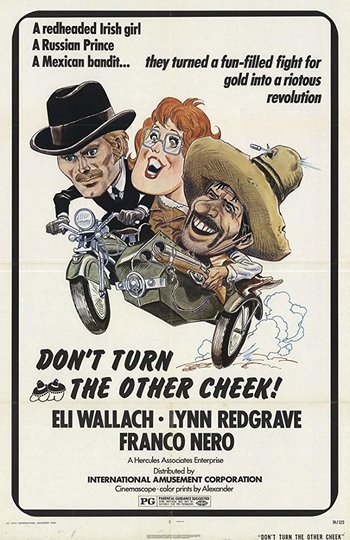 Don't Turn the Other Cheek! (originally titled Viva la muerte... tua!, or Long Live Your Death) is a 1971 comedy Spaghetti Western directed by Duccio Tessari. It's loosely based on a Western pulp novel, "The Killer From Yuma", by Lewis B. Patten. Set during The Mexican Revolution, it tells the story of a Russian conman named Dmitri Vassilovich Orlowsky (Franco Nero) looking for the other half of a treasure map, tattoed on the buttock of Mexican convict Max Lozoya (Eli Wallach). Their little treasure hunt gets complicated when bubbly, bright young Irish reporter Mary O'Donnell (Lynn Redgrave) wants to break El Salvador out of prison, wanting to motivate the Mexican people against the corrupt system, and get a good news story in the process. Hearing of this, Orlowsky, knowing that El Salvador is long dead, pretends that Lozoya is El Salvador. At first, Lozoya only wants to be an "honest bandit", but wears the "El Salvador" name like a thin veil. Then something triggers and he actually starts to care...