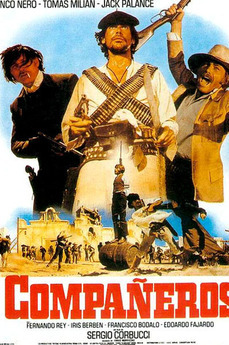 During the Mexican Revolution, in the town of San Bernradino, a peasant known as El Vasco (Milian) kills the army colonel in charge. A rebel leader named General Mongo (Bodalo) arrives and hires Vasco into his gang, but Mongo is Only in It for the Money. A Swedish arms dealer named Yodlaf Peterson (Nero) arrives on the scene to sell guns to Mongo, but the safe is locked and only Professor Xantos (Rey) knows the combination. So Mongo suggests that Vasco and Peterson, whom Vasco dubs "Pinguino", work together to capture Xantos and bring him back. But the two face obstruction from Peterson's old business partner, John (Palance), who wants revenge on Peterson for abandoning him.