Film / Clash of the Wolves 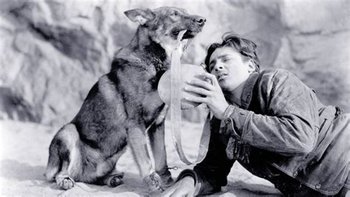 Clash of the Wolves (sometimes also titled The Clash of the Wolves) is a 1925 film directed by Noel M. Smith, starring the Trope Codifier for Heroic Dog, Rin Tin Tin.note Not really the Trope Maker as there was an earlier heroic movie dog called "Strongheart", who is now completely forgotten.

In this film Rin Tin Tin plays "Lobo", a wolf-dog half-breed and leader of a wolf pack. Lobo's wolf pack lives in the Sierra Nevada mountains, but wildfires force Lobo and the pack out of the mountains and into The Joshua Tree area of the California desert. (The movie was shot on land that later became part of Joshua Tree National Park.) Lobo and the pack have a habit of eating cows, and are thus a threat to the cattle ranchers of the area, who form a posse to kill them.

However, Lobo runs into Dave Weston (Charles Farrell) a good-hearted borax prospector who removes a thorn from Lobo's paw. Lobo soon becomes domesticated as Dave's dog. Meanwhile, Dave's borax claim is threatened by evil claim jumper William Horton, who wants Dave's borax and is willing to kill Dave to get it. Who saves the day? Lobo the dog, of course.

Rin Tin Tin was already a huge star, but Clash of the Wolves was a big break for Charles Farrell, who became a huge star of his own by 1927 and 7th Heaven.