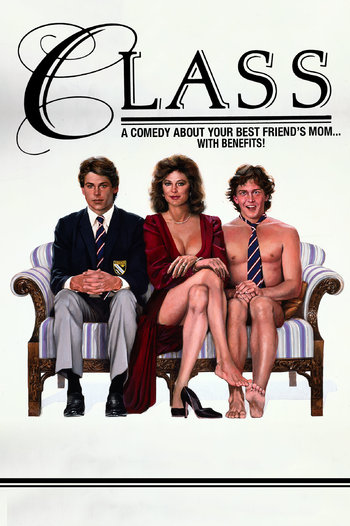 Jonathan Ogner (McCarthy) is a young man from a working-class background who is striving upward. His parents have managed to send him to a snooty prep academy for his senior year of high school. His roommate, Skip Burroughs (Lowe) is from a super-rich family but feels his own pressure, from a domineering father who is pushing him to succeed. After an initial clash Jonathan and Skip become friends.

Skip recommends a club he knows where Jonathan can meet women. Jonathan goes, and meets Ellen (Bisset), who looks to be a good 20 years older than he is but is still gorgeous. Ellen gets the impression that Jonathan is a grad student, Jonathan rolls with that idea, and soon they are having a torrid affair. Eventually, of course, Ellen finds out that her young lover is quite a bit younger than she thought he was.

Then Jonathan finds out that Ellen is Skip's mom.

One of the first films to be associated with the group of '80s actors known as the Brat Pack, specifically McCarthy (in his film debut) and Lowe (in his second movie). Also the film debuts of John Cusack (another student at the prep school), Virginia Madsen (a student at the affiliated girls' prep school) and Lolita Davidovich.