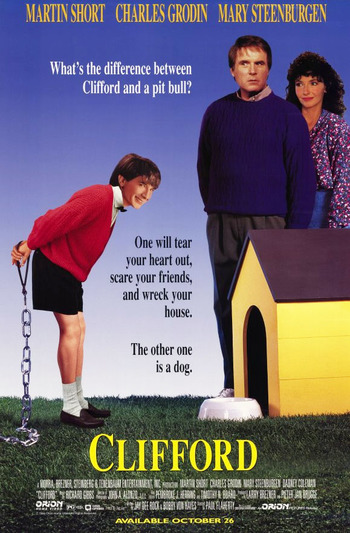 A 1994 Black Comedy film directed by Paul Flaherty, starring Martin Short, Charles Grodin, and Mary Steenburgen. Produced by Orion Pictures in 1990, its release was delayed for several years due to financial problems.

The film opens in the year 2050, introducing Roger (Ben Savage), a 10-year old Catholic schoolboy. The boy has just blown up the school gym because of a personal grievance (his parents wouldn't allow him to join the basketball team). Elderly priest Clifford Daniels (Short) catches up to him and tries to convince him to change his ways. To do so, Daniels starts telling his own life story.

Flashback to 1990, with Clifford as a 10-year-old troublemaker. He has a personal grievance, too. He wants to visit Dinosaur World, a theme park located in California. Instead his parents book airplane tickets to Hawaii. But Clifford finds a way to visit California anyway.

Not to be confused with the large red dog of the same name.

Martin goes crazy when the model of the new railway he's been working on blows up on account of his destructive nephew.

Martin goes crazy when the model of the new railway he's been working on blows up on account of his destructive nephew.