Dinner with the Boss 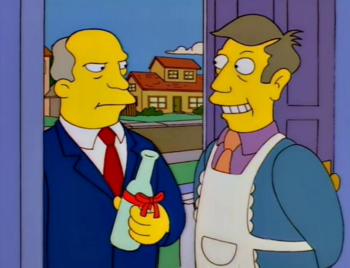 "Ah, Superintendent Chalmers! Welcome! I hope you're prepared for an unforgettable luncheon."
Advertisement:

A standard sitcom plot in which the (Always Male) boss of the main character comes to their home for dinner. Naturally, they'll panic when they learn of it and nervously prepare throughout the episode. Expect hilarity to ensue when the boss finally comes, if there is George Jetson Job Security and the boss is malicious enough to fire someone just because a dinner occasion went awry.

This is a very common trope in sitcoms, particularly animated ones. It's something of a Discredited Trope, though, perhaps due to the fact that it has become increasingly rare in Real Life. After all, having a meeting at a good restaurant is now often more practical.