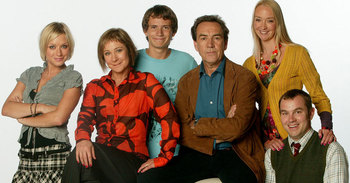 A British Dom Com made by The BBC. It feels somewhat more like an American series than most other Brit Coms, because it was created by an American, Fred "Caroline in the City" Barron, and was produced by the more American styled "team of writers" format (British sitcoms usually only have one or two writers).

The plot is centered around the (of course) dysfunctional Harper clan. Ben (Robert Lindsay), the Dad, is an Al Bundy-esque dentist (only less of an intentional jerk, more of a man of many misunderstandings). His wife is the Control Freak tour guide Susan (Zoë Wanamaker). They love each other but express their love through sarcasm most of the time. Their kids are:

Janey eventually moves out to go to university (she later drops out) and then becomes a single mother. She is replaced by Abi, Ben's Phoebe-ish Ditz/Cloud Cuckoolander (it varies) cousin. Later seasons see the appearance of Butt-Monkey Roger (Ben's fellow dentist and later husband of Abi) and Alfie, Nick's Welsh Cloud Cuckoolander friend who comes to live with the family. In later years, Ben becomes the prominent Butt-Monkey to the point of Deus Angst Machina and sometimes even Kafka Komedy.

It came in twenty-fourth in Britain's Best Sitcom.