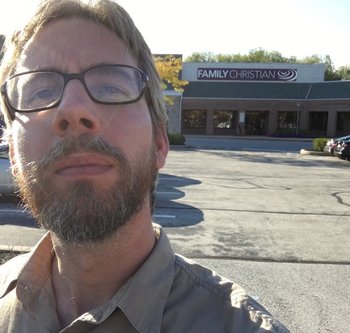 Ephemeral Rift is a YouTube channel and the nickname of its host (sometimes shortened to E.R. or Uncle E, real name Paul). Paul is a YouTuber and podcast host, specializing in ASMR videos and audio.

Having stated on several occasions that he is a fan of, and largely inspired by, horror writer H. P. Lovecraft, Paul's videos are often surreal, confusing, and sometimes even downright creepy. Using a wide variety of characters (all played by himself) such as Professor Clemmons and his brother, Corvus, and wife, Margaret, Deep One Dave, Charlie (Carl), Iggy M. Manley, and many more, Paul has created a deep and confusing narrative of multiple universes and dimensions, often leading to self-contradictions in the timeline.

Please note however that several videos on the channel such as the board games, video games, eating, personal chats or random sound effects are not part of the story canon.

Ephemeral Rift can be found on a YouTube channel

Tropes in Ephemeral Rift videos include: