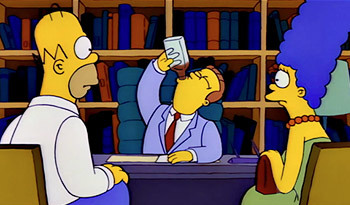 "Imagine if I HADN'T been drunk! Heh heh."
— The Demoman, Team Fortress 2
Advertisement:

Bob's indulging in an adult beverage or two (or three, or four) while he's supposed to be on duty. The consequences for Bob and others depend on whether this Trope is played for laughs or for anvils, but it usually results in Bob getting chewed out, fired, court martialed, or dope slapped. In some rare cases, it ends up making Bob even better at his job, somehow. Unless it overlaps with The Guards Must Be Crazy, in which case you are likely to be killed by the escaping prisoner.

If Bob's duties involve being at the wheel of a vehicle, see also Drunk Driver.