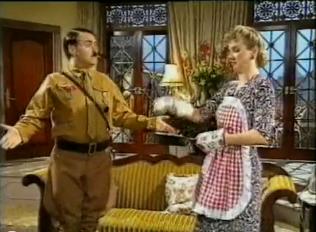 Heil Honey I'm Home! is a comedy show about Adolf Hitler and Eva Braun moving next door to a Jewish couple.

The show was written by British comedy writer Geoff Atkinson (one of the main writers of Spitting Image) in the 1990s, and is an almost perfect example of a Stealth Parody show. Possibly the most bizarre example of a "reimagining", the series set out to depict Adolf Hitler and Eva Braun living in suburban bliss, with their lives interrupted only by Hitler's dislike for their next door neighbours, an incredibly stereotypical Jewish couple. It was presented to the viewer as a "long lost", "recently rediscovered" 1950s sitcom, parodying and distorting beyond recognition the worst features of such programs (with unnecessary canned applause for every character entrance, hideously vacuous plots and dialogue, and a truly awful title sequence).

The show's ultimate intent seemed to be to illustrate and parody the banal, cookie-cutter nature of most shows in this style. However, if one changed the names of the main characters, along with a couple of lines, the show would be indistinguishable from a genuine post-war sitcom, and the humour is largely derived from the jarring fact that the domestic fool main character just happens to be Hitler. That said, it's hard to see how the premise, originally envisioned as a comedy sketch, would've been maintained over a series of shows.

Needless to say, the show proved to be more than controversial. Many found it to be offensive for its trivial attitude towards Nazism, whilst others considered it to be a legitimate comedy along the lines of The Producers and other Third Reich parodies, with the undeniable crassness being an intentional part of the wider stealth parody. And others just thought it was a boring sitcom pastiche that wasn't made funny simply by the fact a guy dressed as Hitler was in it. Eight episodes were commissioned and planned by the now-defunct Galaxy channel of the now equally defunct British Satellite Broadcasting network, but only the pilot was ever aired. The show's filming was immediately canceled upon Sky's acquisition of BSB.

Despite never being shown again, several episodes were filmed, and have since found their way onto the Internet

This has no relation to another short-lived sitcom (on Nickelodeon), Hi Honey, I'm Home! (aside from being a more overt spoof of 50s sitcoms).