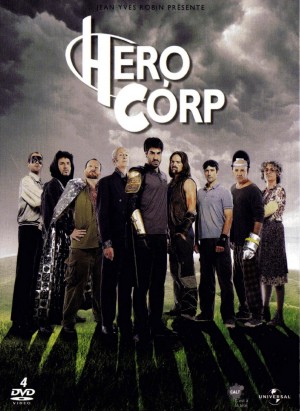 Hero Corp is a French comedic TV series, created and written by Simon Astier and Alban Lenoir and broadcasted on cable channel Comédie+ in 2008. It was produced by CALT, the same company as Kaamelott, and shares several of its actors as well as a similar humor. The series started out as with Dramatic Half-Hour episodes with an overreaching story rather than short gag episodes, however. With its season 3, it changes to a Shortcom format of 7-minute episodes (incidentally the inverse of Kaamelott's evolution).

Hero Corp parodies the Super Hero genre, with many of the characters being former heroes whose powers have fallen behind (if they were any good to begin with). Following a war in the '80s, the Hero Corp agency was created to maintain world peace. It has several secret sites over the planet, and specifically a rural village in the French departement of Lozère where aging heroes live a quiet, peaceful retirement. But a supervillain that everybody believed was dead, "The Lord", is threatening this village.

Following a vision by "The Voice", the main protagonist John is designated as The Chosen One, despite not having any clue about the superheroes world. He is called to the village by his aunt, whom he hadn't seen in 10 years. There, he his swept over by the strange happenings in the village, begins a romance with a "civilian" girl, and starts discovering his own powers. Most of season 1 build up to a big battle against The Lord, John leading the reluctant and bickering villagers to renew with their heroic past.