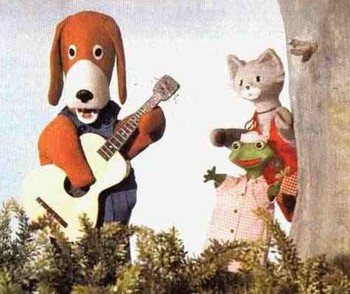 Hector's House (French: La Maison de Toutou Translation "The House of the Doggie") is a 1965 French/British animation. There were 78 episodes that aired throughout five years and each were five minutes long.

It starred a dog named Hector (Toutou in France) and a cat named ZsaZsa (Zouzou in France), who live together in a small cottage with a large, beautiful garden that the two of them tend to frequently. One day, they are visited by a curious frog named Kiki who is fascinated by their garden, and after a moment of sudden danger involving Hector and a hunting rifle, she becomes fast friends with them. Once getting to know her, ZsaZsa and Hector discover that Kiki works as a weather forecaster in London and often talks about how she can tell what weather will come in the next few hours.

Hector is very protective of his garden and is the most dominant in the group, not allowing anyone but him to look after his vegetable patch or to go into his carpentry workshop in fear that everything will be "messed up". This often leads to Kiki and ZsaZsa teaming up to knock him down a peg or two, such as making him reluctantly do things that he doesn't want to do, provoking him when he isn't doing anything bothersome until he screeches at them, and torturing him until he breaks, leading to him saying his famous Mad Libs Catchphrase "I'm a very [adjective] old Hector," closing out the episode.

The English dub is the most well-known version to many. It followed the way of The Magic Roundabout (another show that the British dubbed from a French production) by being named as better than the French version. Nowadays, it's mostly a Cult Classic and a Nostalgia Filter for adults that were the young audience at the time. A few episodes were released in collections on both DVD and VHS throughout the years. Famously, it was the star of many commercials for the Scottish bank The One Account in the early-2000s, and the characters have made frequent Shout-Out cameos on British television.