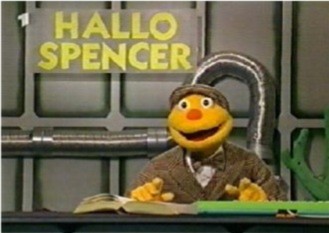 A German puppet show that aired from 1979 to 2001, and was heavily inspired by The Muppet Show. This show stars Spencer in the fictional town of Spencerdorf (the Real Life Spencerville, Ohio in the English-dubbed version). Spencer introduces the viewers and the theme of the episode, with the villagers later contributing something to the theme. Sometimes, there would be special episodes in which the characters would re-tell nursery rhymes or fairy tales or, in one case, the Wolfgang Amadeus Mozart opera The Magic Flute.

Translations into other languages were short lived and didn't always translate well, but regardless, Hallo Spencer is still beloved to this day in its home country. It even received its own section in a theme park.