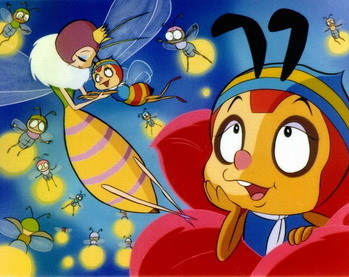 Konchu Monogatari Minashigo Hutch was an anime that ran from April 7, 1970 to September 8, 1971 on Fuji Television for 91 episodes. A 26-episode sequel, with character designs by a young Yoshitaka Amano, aired in 1974 on NET (now TV Asahi), followed by a reboot on Nippon TV in 1989, with some details changed, and a film adaptation in 2010. It was produced by Tatsunoko Production, and is a very well-remembered anime in Japan.

The story was about Hutch, a honeybee who was separated from his mother, a queen bee, when her hive was attacked by a swarm of hornets. The series followed him as he searched for his mother, meeting many insects along the way. The sequel four years later began with Hutch and his sister Aya being forced to journey in search of the Beautiful Hill, on which their kingdom may be reborn.

Saban Entertainment adapted the show in 1995 for the Western world (as Honeybee Hutch), cutting the 91 episodes down to 65. This version ran all over the world, including Fox Kids in Europe. The series also had had earlier Spanish and French dubs produced, with the first French dub, Le petit prince orphelin (Little Orphan Prince), also airing on TVA in Quebec. Perhaps the foreign market where the series was most successful was Italy, where all three TV series were dubbed.

Compare to the considerably Lighter and Softer, and also iconic, Maya the Bee.