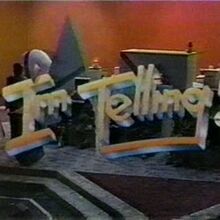 Kids' Game Show from Saban Entertainment that ran for the 1987-88 season on NBC Saturday mornings. Basically The Newlywed Game FOR KIDS!

Three pairs of siblings (one boy and one girl) answered questions about their siblings, each predicting the other's answers. After one round of the girls answering first (25, 50 and 75 points, respectively), followed by one round of the boys answering first (50, 75 and 150 points, respectively), the pair with the highest score received a $1,000 savings bond and got a chance to win up to 20 fabulous kids' prizes in a Bonus Round.