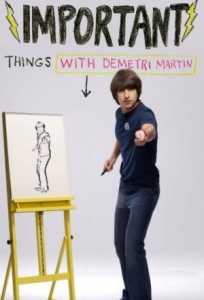 "I'd like to take this opportunity to thank our sponsor. The Important Things series page brought to you by: tvtropes.org, the entertaining alternative to doing something productive with your spare time. Special thanks to your life, for being empty enough to allow itself to be ruined by our sponsor".
— not Demetri Martin, Un-person
Advertisement:

This is... the series page for Important Things With Demetri Martin.

OK, so, what shall we do first?

Read the series summary? OK, we can do that.

Important Things with Demetri Martin is a comedy series that aired for two seasons on Comedy Central, whose host is stand-up comedian, musician and Daily Show alumnus Demetri Martin. It's part stand-up comedy and part Sketch Comedy, and each week, Martin picks one "important thing" such as timing or coolness, then cracks jokes and acts out humorous scenarios (usually with other actors) that all relate to that topic. Occasionally includes mock commercials, animated segments, drawings and music.

...there! Do we check out the tropes?