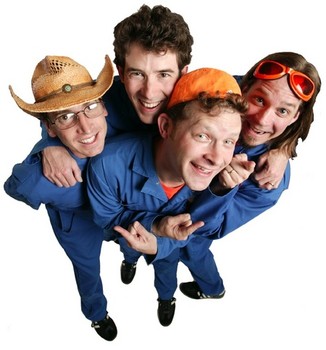 I think what this situation needs is some imagination!note Clockwise from top: Rich, Scott, Dave, Smitty.
Advertisement:

Imagination Movers (2008-2013) is a television show that has been aired on Disney Channel, Playhouse Disney, and Disney Junior. The show is made up of four guys who were friends and decided to make a band together as well as help people solve problems. (The band has actually been around since 2003.) The show originated in New Orleans on public access television, before being picked up by Disney.

The guys are still very active in New Orleans in the parenting community and helping to repair the damage after Hurricane Katrina. Members of the band were directly affected by Katrina right before they began production on their Disney show.

The series is available for streaming on Disney+.

This show incorporates the following tropes: