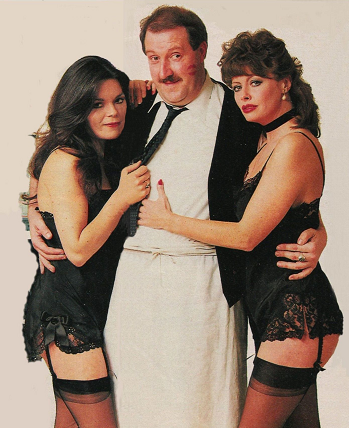 Frankly, we don't understand why he's so popular with the ladies.
"A man is like a bear: the uglier he is, the more attractive he is." Original "El hombre es como el oso: cuanto más feo, más hermoso".
— Spanish proverb
Advertisement:

The polar opposite of the Casanova Wannabe and the Handsome Lech, this character has a long list of conquests and can bend any woman to his will — even though there's absolutely nothing attractive about him. In fact, he's a sleaze and/or looks like a baboon and/or treats women like garbage. Sensible, self-respecting women may scoff, but if so, he'll pull a clever come-on line on them or practice his patented stare on them and they'll be suckered in just enough to be proven wrong.

In some cases, the character is treated as a Sex God even by other characters. In other cases, the character isn't treated as particularly good at getting women - in fact, he might be an outright Casanova Wannabe - and yet, when you actually do the tallying, you realize he's managed to nail about a dozen people, and the entertainment industry being what it is, most of those people are going to be played by good-looking women who should by all means be out of his league. This is especially common in Long Runners, where by nature of the format, even ugly or unpleasant characters tend to accumulate a fair number of love interests, one-off or otherwise.

Possibly owing to Most Writers Are Male, Kavorka Woman is extremely rare. Men are seen to value a women's appearance more than women do men's, so the idea of a genuinely unattractive woman attracting handsome men is considered 'unrealistic'. The closest common example is a Big Beautiful Woman who often has numerous conventionally-attractive men vying for her attention (an archetype with historical precedent in Catherine the Great).

The line between Kavorka Man and The Casanova, usually wide, can sometimes be very fine. A Kavorka Man minus the conquests is a Casanova Wannabe. Compare Ugly Guy, Hot Wife. All Girls Want Bad Boys is when the ladies are attracted to a man with a seemingly repellent personality rather than repellent looks. Often arises due to power's allure or being surprisingly good in bed. Contrast The Schlub Pub Seduction Deduction, in which a beautiful woman will only approach an ugly man if she has ulterior motives. Also contrast Handsome Lech, which is basically an inversion of the Kavorka Man, a man that's unsuccessful with the ladies despite being attractive.

According to sex therapist Victoria Zdrok, there is Truth in Television to this due to what she terms "equity theory": what Kavorka Man lacks in obvious attractors he compensates for with less tangible qualities due to women being more cerebral than they're given credit for.

The term derives from the Seinfeld episode "The Conversion". Has nothing to do with Dr. Kevorkian, for which see I Cannot Self-Terminate. Or Madame Kovarian, the Big Bad of the sixth series of the Doctor Who revival show. Or the children's musician Raffi Cavoukian (yes, Raffi has a last name).

Zelena is in love with Rumpelstiltskin and he knows it. She has to be the fourth woman with a crush on him this entire series.

Zelena is in love with Rumpelstiltskin and he knows it. She has to be the fourth woman with a crush on him this entire series.