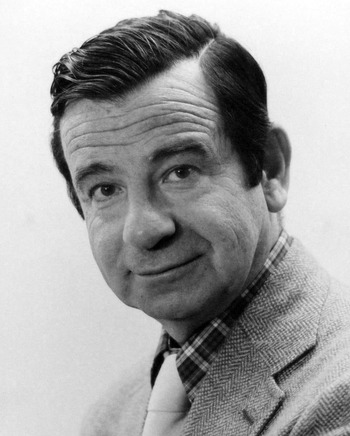 "Every actor looks all his life for a part that will combine his talents with his personality... The Odd Couple was mine. That was the plutonium I needed. It all started happening after that."
Advertisement:

Most often described with the words "rumpled" and "gruff", Walter Matthau (October 1, 1920 – July 1, 2000) would seem an unlikely movie star. And yet his value as a character actor made him a familiar and beloved screen presence spanning five decades.

Born Walter John Matthow, the son of Jewish immigrants from Eastern Europe, Matthau fought in the Army Air Forces during World War II. At the war's end he enrolled in acting classes at the New School. Within a few years he was appearing regularly on New York stages.

Matthau's first big screen appearance came in 1955 with The Kentuckian, and his last was 2000's Hanging Up, directed by and starring Diane Keaton. Matthau was well known for comedy, but could also play convincing and scary tough guys, as shown in an early appearance on Alfred Hitchcock Presents as a corrupt highway patrolman.