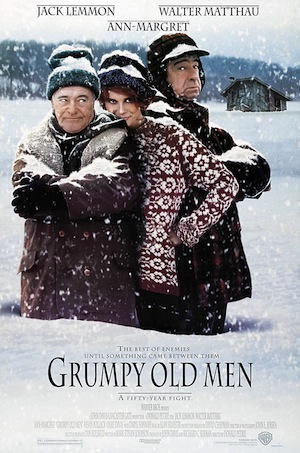 It centers on two, well, grumpy old men, John Gustafson (Lemmon) and Max Goldman (Matthau) who've been neighbors for over 50 years and bickering for most of it, all the while ice fishing on the local lake and putting up with their kids (John's daughter Melanie, played by Daryl Hannah, and Max's son Jacob, played by Kevin Pollak) and John's nonagenarian father (Burgess Meredith). Then the pair's lives are turned upside down by a new neighbor named Ariel (Ann-Margret), and their old feud goes all out to try and win her hand.

The film was successful enough to revive the Lemmon-Matthau team for a string of comedies in the mid-90s, including sequels to both this film and The Odd Couple, as well as The Grass Harp and their final collaboration Out to Sea.note Had Matthau not been too sick to work, their true final pair-up would have been the presidential comedy My Fellow Americans.

Not to be confused with the British talk show of the same name.