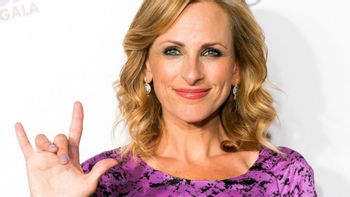 She is notable for being deaf and frequently cast as deaf characters. She won the Academy Award for Best Actress for her debut film performance in Children of a Lesser God. Apart from being the first deaf winner, she was also the youngest person to win in that category at the age of twenty-one, a record she still holds. She also made history at the Tony Awards in 2016 for being the first deaf presenter for a show's performance, introducing the show in which she was making her Broadway debut, a Deaf West production of Spring Awakening.

Although Matlin (almost) always plays deaf characters, usually they will speak English for at least part of their screen time, either for dramatic or comedic effect as appropriate. This (naturally) reflects Matlin's own fluency in spoken English.

Tropes that apply to Marlee Matlin's filmography include:

Jerry and George make a valiant effort to block Jerry's deaf girlfriend from reading their lips but still fail miserably.

Jerry and George make a valiant effort to block Jerry's deaf girlfriend from reading their lips but still fail miserably.