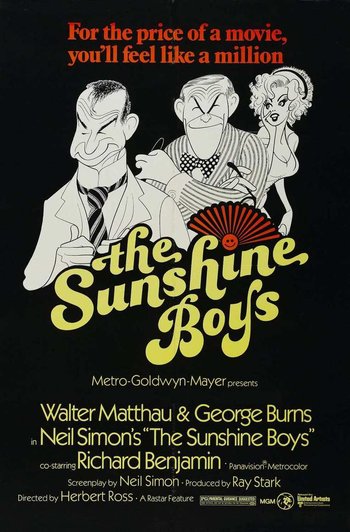 "As an actor, no one could touch him. As a human being, no one WANTED to touch him!"
— Willy Clark, regarding Al Lewis.

Originally a 1972 play by Neil Simon, The Sunshine Boys is best remembered for its 1975 film adaptation directed by Herbert Ross and starring Walter Matthau and George Burns, the latter in a career-reviving, Academy Award winning performance.

Willy Clark (Matthau) and Al Lewis (Burns) were once a famous Vaudeville comedy Double Act, "Lewis and Clark, the Sunshine Boys". Eleven years after the two parted ways on unfriendly terms, Willy's nephew Ben (Richard Benjamin) is a talent agent who's been trying to find his uncle work. One day, ABC inquires about having the Sunshine Boys appear in an upcoming TV special on the history of comedy. Now, it's up to Ben to persuade the long-estranged duo to patch up their differences and get back together.