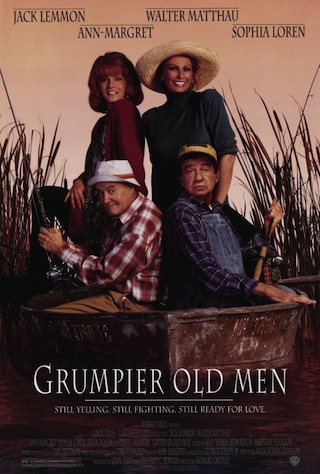 (singing)I just met a girl named Maria! And now I plainly see, she's not the bitch I thought she would be!
—Max Goldman
Advertisement:

Grumpier Old Men is a 1995 romantic comedy, directed by Howard Deutch. It is a sequel to Grumpy Old Men from two years prior.

Lifelong rivals Max Goldman (Walter Matthau) and John Gustafson (Jack Lemmon) are now reluctant friends, with their children engaged to each other, and Gustafson enjoying his still-recent marriage to Ariel Truax (Ann-Margret). Both aging men are looking forward to the opening of the fishing season in their native Wabasha, Minnesota, to engage in their annual hunt of the "Catfish Hunter", the lake's largest catfish. To their disappointment, they learn that the only local bait shop is closing; Maria Ragetti (Sophia Loren), its new owner, is converting it to an Italian restaurant.

The two guys start trying to sabotage her efforts, hoping that the establishment will remain a bait shop, but this enrages Ariel, who forces her husband to apologize to Maria. Unfortunately, his idea of apologizing involves sharing a bottle of brandy with the lady. He ends up sleeping the entire night in the restaurant, infuriating Ariel who concludes that he is having an affair, and annoying Max who finds himself attracted to Maria. Maria herself is reluctant to have a new romance; she has had five failed marriages, and is not looking forward to a sixth. Meanwhile, the kids (Kevin Pollak and Daryl Hannah) have relationship problems of their own.

The film was a modest box office hit, earning $71,518,503 in the United States market. It was the 20th most successful film of its year. It's also notable as the swan song for actor Burgess Meredith, who reprised his role as John's father. Meredith had to retire from acting due to the effects from Alzheimer's disease and had trouble even completing this film.