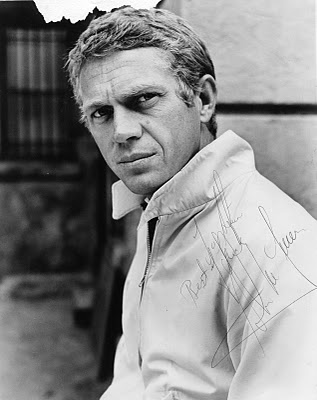 The King of Cool.
"Like Steve McQueen
All I need's a fast machine
And I'm gonna make it all right."
— Sheryl Crow, "Steve McQueen"
Advertisement:

McQueen went into acting following a troubled childhood and a stint in the U.S. Marines. His early film work included a supporting role in the Paul Newman film Somebody Up There Likes Me, about boxer "Rocky" Graziano. He also starred in the horror movie The Blob (1958), and shortly after that began a three-year run as star of the Western TV series Wanted: Dead or Alive.

McQueen's "anti-hero" persona, which he developed on the cusp of the 1960s counterculture, made him one of the top box-office draws of the New Hollywood era. In 1974, he became the highest-paid movie star in the world. Although McQueen was often combative with directors and producers, his popularity put him in high demand and enabled him to command large salaries. He also earned respect for his performances, garnering an Academy Award nomination for his role in The Sand Pebbles.

Began a Romance on the Set with Ali McGraw, his co-star in The Getaway, causing her to divorce her husband, legendary Paramount studio head Robert Evans.

He died of a heart attack while undergoing surgery for cancer in 1980 shortly after the release of his final film The Hunter. His son Chad played Dutch, one of the "Cobra Kais" in The Karate Kid (1984) and is currently known as a professional race-car driver and his grandson, Steven R. McQueen, is a regular on the series The Vampire Diaries.

A friend and student of Bruce Lee, he was one of the pallbearers after Lee's untimely death. During his time with the Marines he saved the lives of five men when the tank they were driving broke through the ice during an Arctic exercise.

His IMDB article (only three digits!) can be found here

Not to be confused with the British film director Steve McQueen, who was named after him.