Film / Love with the Proper Stranger 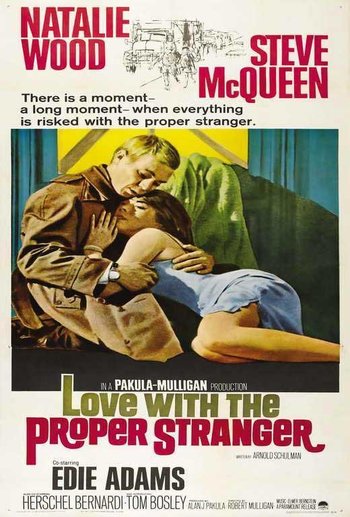 Love with the Proper Stranger is a 1963 romantic comedy-drama film directed by Robert Mulligan, starring Natalie Wood and Steve McQueen.

Rocky Papasano (McQueen) is a musician eking out an uncertain existence in New York. One day when he's at the musician's union hall looking for work, he is met by one Angie Rossini (Wood), a Macy's shop clerk. Rocky fails to recognize her, but Angie assures him that they did meet at a hotel where Rocky had a gig a few weeks ago. Also, as a result of that meeting, Angie is pregnant.

Angie wants nothing more from Rocky than help finding a doctor. Since this is 1963, finding an abortion doctor willing to do an illegal procedure in secret is a challenge. Rocky and Angie's trip to a dirty vacant apartment, where they are met by a distinctly shifty-looking midwife, leads to Rocky pulling Angie out of there and offering to marry her. Angie doesn't want a Shotgun Wedding, though, and romantic complications ensue.