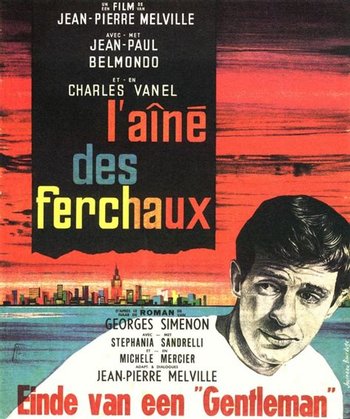 Magnet of Doom (L'Aîné des Ferchaux) is a 1963 film from France directed by Jean-Pierre Melville.

Michael Maudet (Jean-Paul Belmondo) is a washed-up boxer. Shortly after becoming convinced he's a failure and quitting the game of boxing, Michael sees a help wanted ad in the paper and jumps at the opportunity for new employment.

The job is to be bodyguard and secretary to a financier, Dieudonné Ferchaux. It seems that Ferchaux is a crook who has been embezzling from his bank, and also, back in the day somewhere in France's African colonies, he straight-up murdered three troublesome natives. For both these reasons his arrest is imminent. After Michael takes the job the two of them make a hurried departure from France, leaving for New York just ahead of the cops.

Ferchaux hopes to retrieve some fifty million dollars deposited in a New York bank. However, the French have alerted American authorities and Ferchaux is unable to get his money. Ferchaux and Maudet succeed in retrieving a pile of cash hidden in a safety deposit box in another New York bank. Ferchaux, fearing arrest, has Maudet drive him to the American South, where he hopes to find transport to Venezuela so he can access more hidden money. On the way, the power dynamics between the two men begin to change.