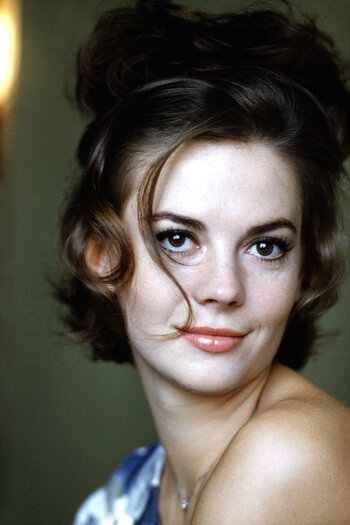 "Stardom is only a by-product of acting. I don't think being a movie star is a good enough reason for existing."
Advertisement:

Natalia Nikolaevna Zakharenko (July 20, 1938 – November 29, 1981), better known as Natalie Wood, was an American actress of Russian descent, most famous for her roles in films such as Rebel Without a Cause, Splendor in the Grass and West Side Story.

She was born to Russian immigrant parents in San Francisco. First appearing onscreen at the age of four and owing her "Wood" stage name to RKO Pictures executives in reference to director Sam Wood, she had a career spanning across five decades, from The Moon is Down (1943) to the posthumously-released Brainstorm (1983). Her sister Lana also became an actress.

She was a relatively rare example of a Hollywood child star who avoided Former Child Star status and became an A-lister in adulthood (Elizabeth Taylor is another), earning three Academy Award nominations (one for Best Actress in a Supporting Role and two for Best Actress in a Leading Role). Critics have theorized that the bulk of her cinematic roles represent a portrait of 20th-century American womanhood in transition. She married Robert Wagner in 1957, they divorced in 1962, then remarried in 1972. She married and divorced British talent agent and producer Richard Gregson in the interim and had a daughter with him in 1970, Natasha Gregson Wagner, who became an actress. She had a second child in 1974, with Robert Wagner this time, Courtney Brooke Wagner, who also became an actress.

On November 29, 1981, Wood — who had a self-admitted fear of water, and never learned to swim — was found dead in the waters of Santa Catalina Island, off the coasts of Southern California. She seemingly fell into the sea from her and Robert Wagner's yacht during a holiday break from the production of Brainstorm with Christopher Walken. Both Walken and Wagner were aboard the yacht when the tragedy happened, and Wagner was named a "person of interest" in the case in 2018.

Tropes and Trivia associated with her works include: