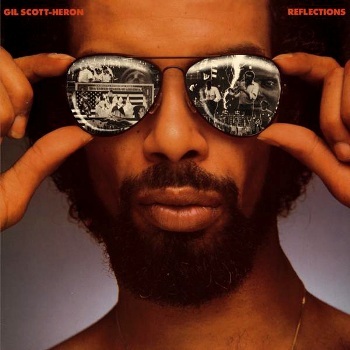 Who will survive in America!?
Advertisement:

Gilbert Scott-Heron (April 1, 1949 – May 27, 2011) was an American poet who rose to prominence during The '70s when he released readings of his poetry on record, accompanied by congas and bongo drums. This gave these albums the same repeated listenability as regular music. The man was praised for his political and social consciousness. He addressed both racial and social problems within the United States, as elsewhere. He criticized Ronald Reagan's politics, as well as the Apartheid system in South Africa.

Scott-Heron's importance within the Afro-American and black consciousness movement can't be overstated. He is regarded as a lyricist and Protest Song writer on the same level as Bob Dylan. Together with The Last Poets, he is also seen as a precursor to Hip-Hop, because his beat poetry backed by a musical background is very similar to the later practice of rappers doing the same over a sample. As a result he has been cited as an inspirational hero to rappers as diverse as Public Enemy, Usher, Eminem, Lupe Fiasco and Kanye West who all refer to him as "the godfather of rap". Naturally, Scott-Heron's voice is Sampled Up to this day by Conscious Hip Hop and Political Rap artists.