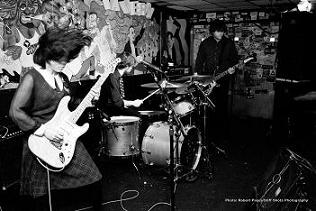 A post-punk trio based out of New Brunswick, NJ. Marissa Paternoster (guitar, vocals) and "King Mike" Abbote (bass) teamed up with drummer Jarrett Dougherty while students at Rutgers University. Although the campus and surrounding town were lacking in venues where bands and fans under the legal drinking age could get together, the "Screamales" took advantage of New Brunswick's quasi-legal house/basement show circuit and quickly began generating audience buzz, mostly from Paternoster's un-punk-rock guitar shredding and primal-scream vocals.

Firm believers in the DIY ethos, they have also managed to tour both the States and abroad and even appear on late-night network TV, all without major record-label or talent-agency backing.