Music / It Takes a Nation of Millions to Hold Us Back 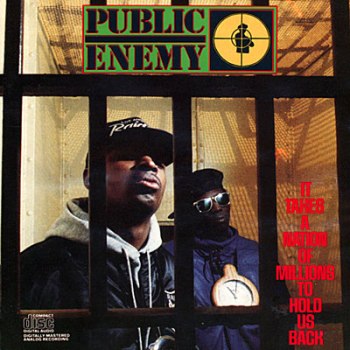 Do believe this hype: It's really an excellent album!
"It still holds up. The beats and production are just incredible. Chuck, Flavor, political consciousness—we all know why this album's great. I can't say anything that hasn't been said about it."
—Chris Rock, who put this album on #22 in his personal list of top 25 favorite Hip-Hop albums, Rolling Stone, 2006.
Advertisement:

It Takes a Nation of Millions to Hold Us Back (1988) is the most famous and critically lauded album by Public Enemy. It scored hits such as "Bring the Noise", "Caught, Can We Get a Witness?" and "Don't Believe the Hype".

"It Takes a Nation of Tropers to Hold Us Back":