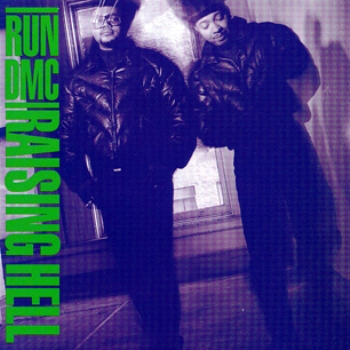 The band that brought hip-hop to the masses.
"Raising Hell is the first great rap album ever. I like Run, but I love DMC. No one ever sounded like DMC; no one ever looks like DMC. He's like a superhero. Raising Hell is probably Rick Rubin's best record. "It's Tricky" is a weird song because it's so gangsta and pop at the same time. There's a track on there, "Hit It Run", which is just DMC with Run doing the human beatbox: "I leave all suckers in the dust/Those dumb motherfuckers can't mess with us." It was actually the first time I heard a guy curse on a record."
— Comedian Chris Rock, who placed Raising Hell on number 4 in his personal list of Top 25 Rap Albums, published in Rolling Stone in 2006.
Advertisement:

Raising Hell is the third album by Run–D.M.C.. Released in 1986, it broke hip-hop out of the underground and into the mainstream. It reached triple-platinum status all across the world, mostly the result of the hit single "Walk This Way", a cover of and collaboration with Aerosmith that is generally credited with sparking a high-profile Career Resurrection for the latter.