Higher Education Is for Women 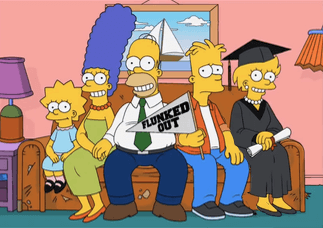 "Girls go to college to get more knowledge. Boys go to Jupiter to get more stupider!"
— Children's rhyme
Advertisement:

When a cast of teenage characters graduate from High School, the girls are more likely to go to university while the boys are more likely to either get a job straight out of the gate, join the military, or at least decide that university is not for them (sometimes briefly attending before dropping out). While there is a Real Life gender split when it comes to higher education — that is to say, proportionally more women go to university — in fiction, this trend can come across as heavily exaggerated. Its representation in modern fiction may be a consequence of real-world statistics and common notions in fiction — perhaps a combination of the belief that female characters should automatically be smarter and that academia is not an appropriately "manly" or "heroic" pursuit for your male protagonist(s).

This is an Evolving Trope as society changes — a couple of generations ago, the gender ratio would have been reversed; and as late as the 1970s, young women attending further education would have been stereotyped as looking out for potential husbands. Currently, the sex ratio in universities is lopsidedly female, but there are often differences in the gender percentage of individual majors — the STEM fields (natural and formal sciences, technology, and engineering fields) are more often than not a sausage fest, but women tend to dominate social sciences, arts, and humanities (also known as social studies), the kinds of fields that are often considered A Degree in Useless; business fields can swing either way, but tend to lean slightly more towards men. For further analysis of the gender breakdown in scientific study, compare the manner in which Hard on Soft Science is frequently divided up by gender ("hard science" = male, "soft science" = female). That aside, the big exception to this "divide" is medicine and medical studies in general, one of the hard sciences that is dominated by women.

Contrast MRS Degree, which is about women getting into higher education not to get an education but a husband with one, although both this trope and the opposite trope can overlap if the woman wants both an education and a husband, particularly if she didn't have a High School Sweetheart.