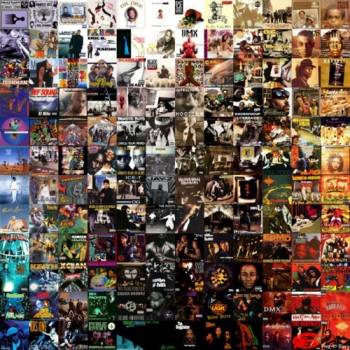 Some of the greatest Hip-Hop albums ever created. And this is just the tip of the iceberg.
Hip-hop's "golden age" (or "golden era") is a name given to a period in mainstream hip hop, usually cited as being from roughly 1986 to 1997, said to be characterized by its diversity, quality, innovation, and influence. There were strong themes of Afrocentricity and political militancy, while the music was experimental and the sampling eclectic. The artists most often associated with the phrase are Run–D.M.C.. (though they started around the old school era), Public Enemy, Beastie Boys (like Run-DMC they started around the old school era), Boogie Down Productions, Eric B. & Rakim, Big Daddy Kane, De La Soul, EPMD, A Tribe Called Quest, and the Jungle Brothers. Releases by these acts co-existed in this period with, and were as commercially viable as, those of early gangsta rap artists such as N.W.A, the sex raps of 2 Live Crew, and party-oriented music by acts such as Kid 'N Play and DJ Jazzy Jeff & The Fresh Prince.
Advertisement:

The golden age is noted for its innovation – a time “when it seemed that every new single reinvented the genre” according to Rolling Stone. Referring to “hip-hop in its golden age”, Spin’s editor-in-chief Sia Michel says, “there were so many important, groundbreaking albums coming out right about that time”, and MTV’s Sway Calloway adds: "The thing that made that era so great is that nothing was contrived. Everything was still being discovered and everything was still innovative and new”. Writer William Jelani Cobb says "what made the era they inaugurated worthy of the term golden was the sheer number of stylistic innovations that came into existence... in these golden years, a critical mass of mic prodigies were literally creating themselves and their art form at the same time".

It also provided some of the greatest advances in rapping technique - Kool G Rap, referring to the golden age in the book How to Rap says, “that era bred rappers like a Big Daddy Kane, a KRS-One, a Rakim, a Chuck D. . . their rapping capability and ability - these dudes were phenomenal”.

There was also often an emphasis on black nationalism – during the golden age of hip hop, from 1987 to 1993, Afrocentric and black nationalist rap were prominent, and when the form most capably fused the militancy of its Black Panther and Watts Prophets forebears with the wide-open cultural experimentalism of De La Soul and others.

Stylistic variety was also prominent rappers had an individual sound that was dictated by their region and their communities, not by a marketing strategist and essentially making the golden age Hip-Hop's era of “eclecticism”. It's also have been noted that albums from the Golden/Silver age also tended to have themes, and a consistent sound.

However, the specific time period that the golden age covers varies among different sources. Carl Stoffers of New York Daily News describes the golden age as "spanning from approximately 1986 to 1997". In their article "In Search of the Golden Age Hip-Hop Sound", music theorists Ben Duinker and Denis Martin of Empirical Musicology Review use "the 11 years between and including 1986 and 1996 as chronological boundaries" to define the golden age, bookended by the releases Run-DMC's Raising Hell and the Beastie Boys' License to Ill in 1986, and the deaths of Tupac Shakur and the Notorious B.I.G. in 1996–97. Coupled with Tupac and Biggie's deaths, the collapse of Death Row Records, the rise of Bad Boy Records, and the rise of "backpack rap" fans who were disillusioned with the mainstream, some have cited the mainstream popularization of Puff Daddy, Ma$e, and Master P in 1997 as being the end of the Golden Age and the start of hip-hop's "Jiggy Era" (also known as the "Shiny Suit Era", "Bling Era", or "Silver Age of Hip-Hop").

Either way The '90s as a whole were a turning point for rap music. The decade introduced a large array of sub-genres that showed that rap could be more than just block party music, and that it could also have strong messages and themes (much to the chagrin of fans who were used to it just being "fun"). It also saw the growth in rap's popularity outside of New York City, or New Jersey (Like New Orleans, Atlanta, Los Angeles, Memphis, Houston, Cleveland, Detroit, and Flint Michigan, Miami, Chicago). And the rise of prosperous Hip-Hop record labels, resulting in what is arguably the climax of the Golden Age era. Incidentally, the late 80s/early 90s are also the period where rap started to grow outside of the United States, each country starting to develop its own specificities in its approach of the genre. France notably had its own golden age in the '90s and early 2000s, an entire French generation growing up with MC Solaar, IAM, NTM, Ärsenik or Oxmo Puccino, to name a few.

For a nice look at this era check out Big Fun in the Big Town, a 1986 Dutch documentary about hiphop that has since then become a Cult Classic. This entire movie is a nostalgic trip to the time of old school hiphop, with many pioneers being interviewed, including Run–D.M.C., Doug E Fresh, Grandmaster Flash and the Furious Five, LL Cool J, The Last Poets and Schoolly D. At the time of recording the genre was still mostly underground, with only a few acts starting to making it big. Many people, and not only in the USA, weren't sure whether the genre was just a passing fad or if it had staying power? By the time the episode got on the air "Walk This Way" by Run-D.M.C. was a huge hit and Hip-Hop finally caught on worldwide, even with people who weren't black. In that regard the docu is a nice Unintentional Period Piece.