Music / All Eyez on Me 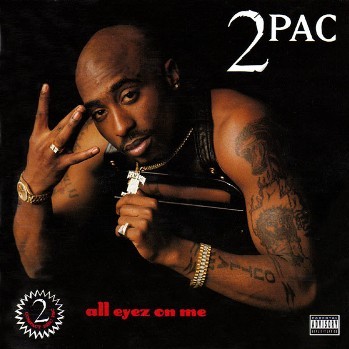 All Eyez On Me is the fourth album by Tupac Shakur, released on February 13, 1996.

In many ways, it was a first for Pac: It was his first double album, his first to be released since being bailed out from prison and signing with Death Row Records, and his first album to be certified Diamond (one of the few rap albums to earn that distinction). It was also his last completed body of work to be released prior to his murder.

Despite the financial success of Me Against the World, Tupac was flat broke, in prison for sexual assault, all but dropped from Interscope Records, and unable to pay his $1.4 million bail due to his legal fees. In October 1995, after having served nine months of his sentence, Suge Knight visited Shakur in jail, and made him an offer: Sign a record deal with Death Row, and the label would personally pay his bail. With no other options, and no money, Shakur signed with Death Row to get out of prison. As part of their agreement, Shakur was required to release at least 3 albums for Death Row in return for posting his bail.

Thanks to a contractual loophole, with All Eyez On Me, being a double album, Shakur could have managed to weasel out of his contract early, since it counted as two albums on it's own.

Recorded entirely in the same month he got out of prison, All Eyez On Me boasted lush G-Funk production from Dr. Dre, DJ Quik (credited under his legal name, David Blake), Johnny J, George Clinton, Daz Dillinger, & more. A celebration of both his release from prison, and of living the "Thug Lifestyle", this album moves Tupac away from his sociopolitical slant, and showcases a more stereotypical Gangsta Rap sound, with hints of mafioso rap. That said, he's still got a few sociopolitical tracks on the album, as well as some introspective tracks reminiscing about old friends.

In addition to the star-studded production on the album, the album also featured guest vocals from established musical vets like George Clinton, Zapp frontman Roger Troutman, Jodeci members K-Ci & JoJo, E-40, Snoop Dogg, and Method Man, the latter being the only Wu-Tang member to have released songs with Tupac and The Notorious B.I.G..note Inspectah Deck was also featured on "I Got My Mind Made Up" with Method Man, but his verse was cut from the final mix.

Upon release, All Eyez On Me debuted at the top of the Billboard 200, eventually being certified Diamond for over 10 million in sales; one of the few rap albums to earn the certification. It also spun off two #1 pop hits in "California Love" & "How Do U Want It", the former of which also helped revive Roger Troutman's then-declining career, and earned both him and Shakur Grammy Award nominations. However, the success of the album did little to ease Tupac's financial woes. Suge Knight kept the album's royalties away from Tupac, under the excuse of not recouping his budget in more ways than one (Most, if not all of Pac's money came from Suge himself, and Knight even owned the house Tupac lived in at the time, unbeknownst to the latter), thus keeping Pac on a leash, and on Death Row. Sadly, Tupac would never get to fully enjoy the success from the album, as he was murdered in a drive-by seven months after its release. After his death, it was said that Tupac had over $15 million in royalties that were never paid out to him from Death Row.