Music / Me Against the World 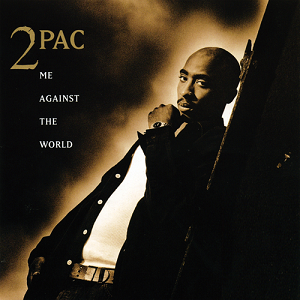 A coward dies a thousand deaths. A soldier dies but once.
More bodies being buried
I'm losing my homies in a hurry
They're relocating to the cemetery
Got me worried, stressing, my vision's blurried
The question is, "Will I live? No one in the world loves me"
I'm headed for danger, don't trust strangers
Put one in the chamber whenever I'm feeling this anger
Don't wanna make excuses, cause this is how it is, what's the use?
Unless we're shooting, no one notices the youth
It's just me against the world, baby.
—"Me Against the World"

Me Against the World is the third album by Tupac Shakur, released on March 14th, 1995.

After the success of his sophomore album, 2Pac was quickly making a bigger and bigger name for himself in the hip-hop scene. However, not only was he robbed and shot five times in the lobby of Quad Recording Studios in Manhattan (the event that marked the beginning of his infamous feud with The Notorious B.I.G. and Bad Boy Records), but he was also running into quite a bit of legal trouble. This all culminated in him and two members of his entourage being accused of alleged sexual assault. 2Pac denied the charges but was ultimately sentenced to 4.5 years in prison, with his bail set at 1.4 million, which he could not pay due to his legal fees (Now Suge Knight, on the other hand...) In dire financial straits and with a prison sentence looming over him, 2Pac vented all of his stress, frustration and anger into his next album: Me Against the World.

Featuring production that is smoother and more G-funk influenced than his previous two albums, Me Against the World finds 2Pac at his most introspective and emotional yet as he reflects on his life up to that point, ponders his future, and covers important aspects and issues such as his growing status as a popular and controversial figure, his legal issues, and women (especially his mother). That said, he still shows his thug side on a few tracks and kicks a few jams for the ladies.

Released while he was incarcerated, Me Against the World was a smash hit, debuting at #1 on the Billboard 200 and staying there for four weeks in a row (in fact, 2Pac became the first artist to have a #1 album released while they were in prison), and by the end of '95 it had gone double platinum. It spawned three singles - "Dear Mama", "So Many Tears" and "Temptations". The album also received much critical praise for its deep and introspective lyrics, with many calling it his best album yet. And to this day, many consider Me Against the World to be 2Pac's best album - an opinion that the man himself shared.

I see tropes around the corner...