Even Bad Men Love Their Mamas 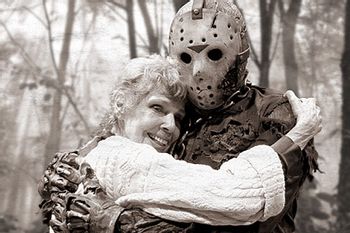 Even if they're basically a walking corpse.
"They just keep knocking the crap out of me and waving a confession in my face. And I keep spitting blood all over it and laughing at how many fresh copies they come up with. Then along comes this worm assistant district attorney who turns the recorder off and says if I don't sign their confession, they'll kill my mom. I break his arm in three places and I sign it."
— Marv, Sin City
Advertisement:

Yep, even the biggest bad guy around can still have a soft spot for their parents. Sure, you've killed scores of innocent people and committed several acts of terrorism, but come on! They raised you and took care of you when you were sick!

A Sub-Trope of Pet the Dog and of Even Evil Has Loved Ones, this is when a villain or a Jerkass is made more endearing via a loving relationship with their parents. It is usually just used for a quick punchline, but occasionally the concept is a bit more fleshed-out, on which case it may overlap with Morality Pet.

This trope is why Your Mom is a universal insult; villains from the petty thief to the serial killer don't take kindly to abuse thrown at their mothers.

See Momma's Boy or Daddy's Girl for a similar (and usually more heroic) trope. The parent in question may or may not be a Mama Bear or Papa Wolf. If the parent is a villain themselves, the trope will always overlap with The Family That Slays Together. In this case, it could also be a case of a Villainous Mother-Son Duo. The inverse is Villainous Parental Instinct, where a villainous character still feels parental instinct and will sacrifice something important when their kids are in danger. Compare Even Evil Can Be Loved.

When the villain/jerk tries to keep their family in the dark about being a bad man, then you have a case of Don't Tell Mama. If one of them finds out anyway, they (especially the mother) might react with Mama Didn't Raise No Criminal. Defying this can lead to Hates Their Parent; see Matricide, Abusive Offspring, and Self-Made Orphan for villains who really go out of their way to defy this.

The Complete Monster, on the other hand, as bad as they may be, could care less for their parents. Even if they did somehow care for them at some point, that care is all rendered moot upon realization that it's only for their own personal benefit. And if they legitimately care for them, in the end, it's either possessive obsession or perversion.