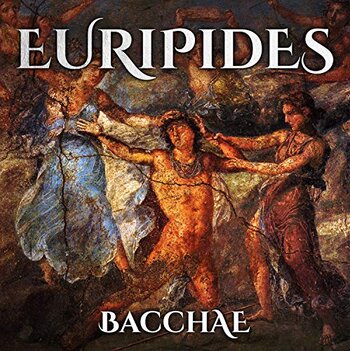 Bacchae is a Greek tragedy composed by Euripides and performed posthumously at the Theatre of Dionysus in 405 BC, where it and the accompanying tragedies won first prize.

The play follows the young god of wine and ecstasy Dionysus' return to Thebes, where most of his mortal family — his grandfather Cadmus, his aunts (Ino, Agave, and Autonoe) and his cousin Pentheus — have openly denied his divinity, claiming instead that Semele was killed by Zeus for pretending he was the father of her illegitimate child, who in reality Zeus rescued, raised and deified. Dionysus is enraged by this insult to him and his mother and seeks revenge against the whole city.

As a result, he drives his aunts and the rest of the Theban women mad, causing them to desert their homes and dwell in the mountains with his own followers, the maenads/bacchants. He then turns his attention upon Pentheus, the present king of Thebes, who dares to θεομαχεῖν (make war against a god) — not a wise thing to do.

Pentheus soon captures Dionysus, who is disguised as a mortal priest, and questions him. Frustrated by his evasive replies, the king has him imprisoned. However, Dionysus quickly escapes, destroying Pentheus's palace with an earthquake.

The god then takes advantage of Pentheus's desire to see the secret orgiastic rites of his followers, convincing him to dress as one of the women and spy upon them. Soon the doomed king is disguised and led from the safety of Thebes into the mountains, where Dionysus enacts his punishment upon both his cousin and his aunts.

The play is available online here

... if you're not in the mood to translate ancient Greek, you could look here

. Note: There is a massive gap in the text near the end.