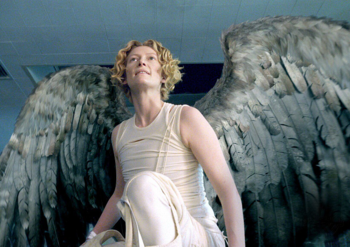 Ray: It's a girl.
Egon: It's Gozer.
Winston: I thought Gozer was a man.
Egon: It's whatever it wants to be.
— Ghostbusters (1984)
Advertisement:

Whenever you see a demon, god, or someone or something else otherworldly you'd expect it to be easy to tell if it is a man or a woman. But when they have qualities of both? Or lacks qualities of either? Or can change from one to another with neither being the confirmed default? They are Otherworldly and Sexually Ambiguous.

There might be reasons why or how the demon, spirit, etc., is a hermaphrodite, can change sex, etc., be it either magical corruption, or the creators didn't want to give the character a definitive sex, so they made them ambiguous. Sometimes it's just a striking detail that reminds the audience that this individual isn't a mundane creature, and that the shape they're in now might just be A Form You Are Comfortable With.

Much as Discount Lesbians and Female Angel, Male Demon, non-binary audiences often accuse this trope of having Unfortunate Implications, due to implying that the "non-male-non-female-ness" of these characters is due to their lack of humanity.

See also No Biological Sex, Hermaphrodite, Voluntary Shapeshifting, Non-Human Non-Binary, Non-Humans Lack Attributes, and Ambiguous Gender. May cross over with Shapeshifters Do It for a Change. Subtrope to Speculative Fiction LGBT.