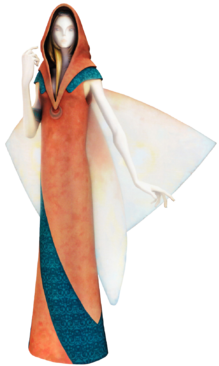 "Are you an angel? [...] I've heard the deep space pilots talk about them. They live on the moons of Iego, I think. They're the most beautiful creatures in the universe."
Space Angel
Singing, whinging, way up high.
Space Angel
Cosmic sugar, flutterby.
Flowing, freak-out, upside-down,
Come with me and you will see
I can kick it, hyper-drive
Hanging zero gravity.
— Cassiopeia, Duck Dodgers episode "They Stole Dodgers' Brain"
Advertisement:

These Human/Rubber-Forehead Aliens are tall, willowy and graceful — and incredibly beautiful to humans. Bonus points if they glow, are made out of Pure Energy, or have some kind of ethereal quality.

They are distinct from Space Elves insofar as Space Elves are defined more by their personality (uptight and academic) and superiority complex than their appearance. The chief characteristics of the Space Angel are its beauty and grace, and it is not uncommon for them to be silent, adding to the high-class feel. (If they do talk, expect their voices to also be incredibly beautiful, as well as resonant.) Radiant and glowing, these beings leave humans awestruck and may prompt more superstitious characters to actually compare them to angels. If the appearance or abilities of the Space Angels validate traditional depictions of angels, it may be a case of Ancient Astronauts.

Their clothing will likely be composed of elaborate flowing robes, but it is just as common for Space Angels, particularly Energy Beings, to not wear them. This can be for any one of a number of reasons: They may be agender (or at least appear that way); they may lack clothing taboos; or their "clothes" might appear to be integrated into their bodies. There is a high chance that a Space Angel will have jellyfish-like frills and/or tendrils, likely as a form of Alien Hair.

They are likely to have advanced technology, telepathy, empathy and other hallmarks of Sufficiently Advanced Aliens and may indicate a race of Rubber-Forehead Aliens that has reached the apex of technological advancement or Ascended to a Higher Plane of Existence.

The facial forms of Space Angels are likely to evoke The Greys (large eyes, small or no nose, small mouth), possibly due to the visual and mythological links between aliens, angels, and elves/fairies. However, unlike the Greys, Space Angels are normally kind, gentle beings who are friendly to humans, though they are sometimes depicted as unknowable, with morals and motives above and beyond our understanding.

Not to be confused with the 1960's animated series Space Angel, whose title character is a Captain Space, Defender of Earth! type; or with Casper and the Angels, where the "angels" in question are a pair of female space cops.