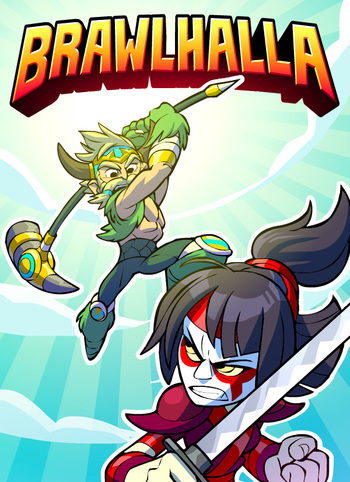 Here we see a viking fighting against the bride of a Japanese demon. This is completely normal, by the way.
Advertisement:

Brawlhalla is a Free-to-Play Fighting Game based off of the Nintendo's Mascot Fighter Super Smash Bros.. The game was created by the Atlanta, Georgia-based Blue Mammoth Games, who also created Dungeon Blitz, and is published by Ubisoft.

The game takes place in Valhalla, where its only inhabitants are those who died in fame and glory (or infamy), mythical beings, beings of a different planet, and people who just want to fight other people. In Valhalla, combatants called Legends from all sorts of times and places fight in a seemingly never-ending tournament to be known as the greatest warrior of all time.

In essence, Brawlhalla sticks to the staples of the subgenre; you and up to seven other people fight to build up damage on one another until someone is knocked out of the ring. In some modes, you gain points by KO'ing opponents, in others, you lose a life if you're KO'd. The person with the most points or the last man standing wins. This is the standard mode, but there's also 2V2 modes, and even a side-game called "Brawl Ball", which is pretty much a strange combo of American Football and Soccer.

What makes Brawlhalla different from most platform fighters — and pretty much most fighting games — is that your moveset is already, well, set. Where most fighters in other games, in general, have unique movesets to them, Brawlhalla has none of that, and all normals are the same for each character. What Brawlhalla does have are three unique systems — weapons, stats, and the gravity cancel ability.

Stats are the main character modifiers. Each character is given a value between one and nine in four categories; Strength, Dexterity, Defense, and Speed. Each stat, depending on how low or high it is, can change a character's playstyle. They work as follows:

Stats aren't the only thing here, though. The name of the game in Brawlhalla is weapons. Each character has two of thirteen possible weapon types that they can use by collecting weapon drops throughout the stage (with the occasional bomb or mine). No two characters have the same two weapons, and similar to the standard movesetnote dubbed by players as "unarmed", the normals are the same for each character. However, each weapon has three special moves called "signatures"note dubbed as "sigs" by the community that are unique to each character, and every character has six of them. The weapons are as follows:

Brawlhalla also has no blocking, instead favoring dashing and dodging. In place of that, however, is the ability to gravity cancel — that is, using a ground move in the air.note Usually referred to as "gc" in the community. Because of this, combos and mixups can be much more complex.

The game was first playable in Early Access in April 2014. Its open beta began in November 2015 and was given a full release in October 2017. A PlayStation 4 version was released at the same time as the official release, Xbox One and Nintendo Switch versions were released on November 6, 2018.

The Characters page needs to be updated, and more images need to be added.