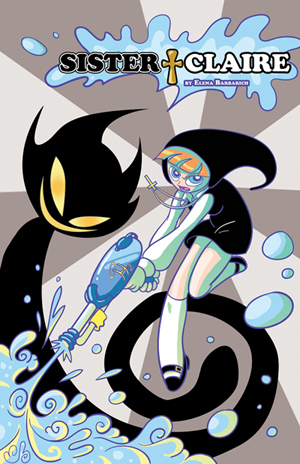 is a webcomic created by Elena Barbarich (a.k.a Yamino

The comic starts off comedic and full of Shout Outs and homages, but becomes much more dramatic and serious in the transition to Book 2.

Sister Claire is a novice nun, and all she ever wanted was a purpose in life, and a kitten would be nice, too. But when a beautiful blue businesswoman named Gabrielle explodes out of her toilet and tells her she's pregnant with the new Messiah, this Celibate Heroine realizes she may be in for more than she bargained for: a fantastic adventure to protect her miraculous baby (and possibly the universe) from total rapture.

Sister Claire's best friend and mentor, Sister Catharine, is unfortunately extremely allergic to cats, which is why Claire is forbidden to play with them. Unfortunately for Catharine, Claire can't seem to stay away from her best cat-friend Snowy for long, and this brings down harsh punishment from the terrifying Sister Marguerite, who finds every excuse to torment Claire with cruel and unusual punishments.

Claire initially crumbles under the guilt of accidentally aggravating Catharine's cat allergies and from the pressure of becoming the mother of the new Messiah. (Her pregnancy is confirmed by a flurry of strange blue babies, who turn out to be rather disposable.) The plot thickens as Sister Catharine appears to be stalked by an evil Cheshire-like cat, who eventually possesses her, turning her into the evil Sister Cat.

After temporarily defeating Sister Cat with her holy Watergun, Claire begins her training in Nun Fu. And as the story continues, it's revealed that there's more going on than Gabrielle let on and much bigger threats on the horizon coming Claire's way. Will her newfound training see her through before the birth of her child?

The story is presented in two formats, comic updates (every Monday and Friday) and Missing Moment stories, illustrated prose that usually focuses on the characters' pasts, updated Tues-Thurs. Some suggested reading orders can be seen here.