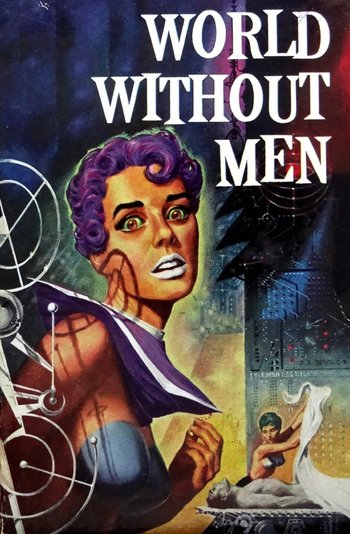 The lesbian version of 1984.
Advertisement:

Speculative Fiction with a heavy emphasis on LGBT themes.

Settings commonly used in Speculative Fiction stories typically fall into the Uncanny Valley — that is, they are similar enough to be accessible, but different enough to feel unfamiliar and uncomfortable. Because of (or in order to enable) this, there may be a larger or more prominent group of LGBT+ characters.

Also known as the "time-travelling lesbians", it is notable that Speculative Fiction is kind of the San Francisco of media genres — a much larger LGBT population than the rest of its kind, and with reason. The most widely acknowledged of these reasons is that the fantastical setting (as close as it may be to the society of its creation) is not 'Real', and therefore the creators have more room to discuss things that might be considered controversial or unusual. This may be used as a statement on the society in which the work is being produced, but is not necessarily. It is related to the Discount Lesbians trope, where a lesbian couple is deemed more acceptable if one or both (or more) isn't human and so they aren't really lesbians, though this would instead be where it isn't really Earth so it can't really be (or, so it's alright if it isn't) taboo.

Another reason to include non-heteronormative characters in Speculative Fiction may be to support theories of the future of humanity becoming largely bisexual, and also those that suggest potential alien civilisations may not even have sex as we view it.

It may also be, drawing back to the idea of the Uncanny Valley, being used as a marker in order to separate the Speculative Fiction world from the real world. There may be little changed in a humanoid alien civilisation or 20 Minutes into the Future, but a difference in view on gender and sexuality (whether global or just authorial) is a sufficient deviation from the norm that it would suggest somewhere very departed from current Earth's climate.

The use is also one way in which media connects the ideas of advancing scientifically and LGBT+ issues, making discussions of gender and sexuality a decidedly modern concern.

In short, Speculative Fiction settings feature LGBT+ characters and themes because they are distanced from the real world.

This trope's modern Ur-Example may be either Theodore Sturgeon's The World Well Lost (1953), acknowledging sexuality, or Virginia Woolf's Orlando (1928), mostly regarding gendernote The Ur Examples for Lesbian Vampire may be older, but the early manifestations of that trope were very outwardly using lesbianism as a distinctly negative quality and to further create the monstrosity of vampirism. The latter is discussed on the Encyclopaedia of Fantasy's entry for "Temporal Adventuress

", which includes many female time-travellers who deviate from conventions of gender and sexuality. Of all the variations upon the Other-ing nature of this trope, the time-travelling lesbian may be one of the most prominent as it allows for no fixed period to be set in which the acceptability is occurring, as well as for the issue to be discussed across past and future times, and perhaps also appealing to the presumed audience as a bonus.

Also note that, while some speculative fiction works project LGBT themes onto alien civilizations in order to explore them from a comfortably safe conceptual distance (especially a few decades back, when censors were a lot harsher), or exaggerate them to have fun with weird speculative space sex, others frame them around their hopes or thoughts regarding the progression of real-world civilizations. The latter group tends to present LGBT themes as relatable or commonplace, rather than as a matter of spectacle. Both are made possible because of the setting difference.

An authoritative work on the trope, Uranian Worlds: A Guide to Alternative Sexuality in Science Fiction, Fantasy, and Horror was published in 1983. The title is a Multiple Reference Pun to 'Uranian' meaning things pertaining to the planet Uranus, a euphemism for homosexual, and in some spaces a third gender.

This trope has, with the rise of podcasts, also become extremely popular in this medium, which has historically been more accepting and exploratory due to its grassroots nature.

Compare Fetish-Fuel Future, when an author creates a futuristic setting where their personal kink is universally shared or tolerated.